D-Day veteran made all the right moves 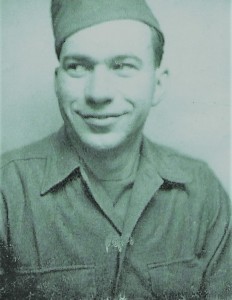 Dan Curatola of Bethlehem, Pa., had this picture taken in a coin-operated booth in Verdun, France, in May 1945.

You could not beat Dan Curatola at checkers. I tried over and over again, with no luck. His nimble brain was always ahead of the game, anticipating every move as he closed in for the kill. He was focused, relentless. It was amazing to see.

He was 89 when we played, and said he was the checkers champion in Bethlehem, Pa., his hometown, before the U.S. got into World War II. His next move was to the Army’s 1st Infantry Division, which took him to North Africa, Sicily and France. He had a facility for language – he spoke Italian, quickly picked up French.
On D-Day, June 6, 1944, he was in the first wave at Omaha Beach. Think of the beach scene in Saving Private Ryan and you have an idea what he went through. Two days later he was wounded and almost died.

Dan had two Bronze Stars for heroism and a Purple Heart. I interviewed him for a story marking Memorial Day 2009. It ran in two parts in The Morning Call and also appears in my book War Stories in Their Own Words, http://store.mcall.com/war-stories.html.

He told me that he could never forget the war and men dying. It was burned in his consciousness, he said.

June 2009: Dan Curatola and I stand in front of an Army jeep at the annual D-Day remembrance picnic in Nazareth Boro Park.

Dan and I stayed friends. Besides playing checkers, we went to luncheon meetings of the Lehigh Valley Chapter, Veterans of the Battle of the Bulge in Walnutport, where he once shook hands with a distinguished visitor, Mario Andretti. (Dan was a member of the Bulge group because, after recovering from his wounds, he returned to the war zone for limited duty during the German offensive.) He was honored with other local D-Day vets at VBOB’s annual picnic at Nazareth Boro Park commemorating the Normandy invasion.

One day when I was driving him to one of the VBOB lunches, he sang for me. It was a song he had heard only once, in 1944 in Kidderminster, England, in a hospital ward packed with other wounded soldiers. A U.S. Army nurse came into the ward with a guitar to entertain the men, sat down and sang a tune she herself had written. Dan not only remembered the music, he remembered the lyrics. It was all the more incredible in light of the condition he was in as he lay in the ward – shrapnel had almost torn off his left arm, he had shrapnel in his back and right leg, and a bullet in his side.

Dan played pinochle and enjoyed Lehigh University wrestling. As a boy, he went to Yankees games in New York and saw Joe DiMaggio play. He was an attentive fan, always keeping a meticulous scorecard. When I took him to a Lehigh Valley IronPigs game, we sat in the right-field bleachers and he dutifully scribbled on a scorecard, recording each out. I had a fright when a rocket-like line-drive foul ball slammed into an empty seat directly in front of us. I’d stood up and put out my hands to deflect it, if necessary, determined not to let the ball hit Dan. I couldn’t let a war hero die from a foul ball at a minor-league baseball game.

In the fall of 2010, Dan and I went on a bus trip sponsored by the Lehigh Valley Veterans History Project to see the National World War II Memorial in Washington, D.C. When we got back, the Sands casino in Bethlehem treated our entire group to dinner. As gratifying as the trip was, I could tell that Dan’s once-steely mind was slipping. He had bouts of confusion.

The following spring, Dan was admitted to the nursing home at the VA Medical Center in Wilkes-Barre. He would never return to his home in Bethlehem, where he’d lived alone.

Months after he was moved into the VA hospital, I went to visit him but didn’t stay long. I wasn’t sure he recognized me. He did seem to remember his role on D-Day, when I mentioned to others in the room that he was in the first wave ashore at Omaha Beach.

“It’s something you never forget,” he said, looking at me straight in the eye, emphasizing each word.

2 responses to “D-Day veteran made all the right moves”