How war veterans have touched my life 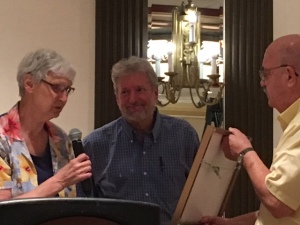 Judy Greenhalgh, me and Dick Musselman of the Lehigh Valley Chapter of the Veterans of the Battle of the Bulge at the group’s July 19 meeting in the Best Western outside Bethlehem. My wife, Mary, took the photo.

In 17 years of interviewing war veterans, I got back much more than I gave.

It was an honor and a privilege to meet with men and women who put on a uniform when the country called and did their duty, sometimes at risk of life and limb. I met with more than a hundred of them and considered all of them my friends. They taught me the meaning of courage and sacrifice. It hurts when I see the names and faces of the many who have since died.

I was grateful that veterans welcomed me into their homes and put their trust in me – a confidence that allowed some to reveal dangers they faced that they had never even told their own families about. Sometimes our conversations coaxed long-suppressed memories to the surface. During two interviews, I looked on dumbly as the old men fell from composure to shoulder-heaving sobs in a split second. It was post-traumatic stress flaring up after more than a half-century, exposing raw emotional wounds. The one veteran had just told me about bayoneting a German officer to death. The other was flatly describing the “canyon of death” that kamikazes created on his aircraft carrier.

Some found that talking about their experiences upset them. Joe Poster yelled at me once when I showed up at his door, saying I was causing old horrors to haunt him in the night. He had endured the Bataan Death March and three years as a prisoner of the Japanese.

When the stories made it into print and onto The Morning Call’s website, I had the satisfaction of seeing the veterans receive the attention and recognition they deserved, and of knowing their families were filled with pride. The night before publication of every story, I would ask God to be with my subject. One veteran, Poster, had told me he was anxious about his account being seen by perhaps tens of thousands of readers. He worried that people wouldn’t believe the fear and suffering he had known in the war. But weeks after his story ran, he told me excitedly, “Since that story was in, I can do no wrong!”

It was also rewarding to have a role in bringing long-ago foes together. One of my storytellers was Eddie Sakasitz, who had served in an anti-tank unit of the German army on the Eastern Front and in Italy, where he was machine-gunned in the legs. After his story ran, the Lehigh Valley Veterans of the Battle of the Bulge invited him to attend its monthly luncheon meetings. Almost until the end of his life, he did, bringing along his wife, Catherine. He liked to repeat a joke he and his Wehrmacht buddies used to tell: “We lost the First World War. We’ll win this one, too.” German soldiers, he explained, risked harsh punishment if officers heard them sounding defeatist. At one meeting, I saw Eddie sitting and chatting amiably with Ray Christman, another of my subjects. Captured by the Germans during the Bulge, Ray almost died in a POW camp.

Over the years, I had gone to meetings of veterans groups like the “I Was Shot At” club and the Lehigh Valley unit of the U.S. Submarine Veterans of World War II, both of which met at the City View Diner in Whitehall. But no group I spent time with was more active than the Bulge veterans, VBOB for short. I became an associate member about 20 years ago, when they were meeting at the Terrace restaurant in Walnutport, and interviewed many of its members, including longtime president Morris Metz. They now meet at the Best Western outside Bethlehem, still on the third Tuesday of each month.

Some interviews led to opportunities to present war stories at public events. While Don Burdick was telling me about his experience at Bastogne, he showed me something he had kept under wraps – gruesome photos he’d taken during the liberation of the Dachau concentration camp. That led me to write a follow-up story about Don and his collection of images. After that, the Jewish Federation of the Lehigh Valley invited me to do an on-stage interview with Don to mark Holocaust Remembrance Day. Several hundred people at the Jewish Community Center in Allentown heard Don articulately convey his horror over what he’d seen at the Nazi camp.

For this past Memorial Day, ArtsQuest invited me to do a program at the SteelStacks campus in south Bethlehem. I had three World War II veterans on stage, all men in their 90s whose stories I’ve written: Joseph E. Motil, who hit Utah Beach on D-Day; Carl A. Schroeter, who was captured by the Germans in the opening days of the Battle of the Bulge; and Bob Holden, a crewman aboard the USS Finback when the submarine rescued downed flier George W. Bush.

Such accounts exist beyond The Morning Call’s website, where they are permanently posted at http://www.mcall.com/warstories. The WWII stories also go to the archives at the National World War II Museum in New Orleans.

My work has always been about informing people of what servicemen and women have seen and accomplished, and preserving their remembrances for future generations. I don’t like the limelight; I’d much rather labor in the trenches. But after I retired from The Morning Call on July 1, VBOB turned the tables by saluting me, a non-veteran. My wife, Mary, and I were treated to lunch at the July 19 meeting and heard kind words from Dick Musselman, Lionel Adda, Judy Greenhalgh and others.

The VBOB group also presented gifts. They included a large, framed certificate showing the patches of all the major units that participated in the Battle of the Bulge, with a personal message thanking me for my “passion and perseverance in giving a voice to local veterans whose stories would have otherwise been lost to posterity, for bringing to light the personal accounts of bravery, courage and suffering of the local men and women who served in defense of our country’s values and freedoms.” I received an album of pictures showing many friends I’d made through my work, and a Case knife gift set commemorating V-E Day. I also got a written message from a great friend and admirer of the veterans, who congratulated me on my “contributions to the LV Chapter Veterans of the Battle of the Bulge.” The signer: Mario Andretti.

For many years, my reward has been in meeting veterans, spending time with them and getting their stories into the newspaper. This tribute from VBOB was icing on the cake, one of the nicest things that has happened to me.

The veterans I’ve known have given my life added meaning. I will always cherish their friendship.

One response to “How war veterans have touched my life”