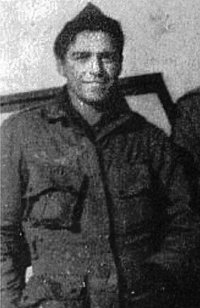 The call came from “Bench” Hartman in May. As happened every spring, he had gotten an invitation in the mail to be a guest of the Lehigh Valley’s Battle of the Bulge veterans as they honored local men who participated in the D-Day assault.

“Can you give me a ride to this thing?”

Of course I could. I’d been taking him to the annual D-Day Remembrance picnic in Nazareth for several years, ever since he started going.

Bench had been with the 101st Airborne Division. He grew up in Hokendauqua in a family of 10 and worked at the Durable Pants factory in Northampton, pressing pants for the British army, before joining the U.S. Army and volunteering to be a paratrooper for the extra pay.

He made the D-Day jump behind Utah Beach with Company C of the 502nd Parachute Infantry Regiment and later parachuted into Holland and fought on a hill near Bastogne during the Battle of the Bulge. He was wounded twice in the legs and earned a Bronze Star for heroism at Chants, Belgium. The citation says he “volunteered to lay a communication wire and carry ammunition to isolated outposts…crossing 300 yards of open terrain, under machine gun and sniper fire.”

Early in 2006, I got a phone tip from a Lower Macungie man who knew about Bench’s role in the war. Bench agreed to talk about it, and that was the beginning of our friendship.

After his story ran on the D-Day anniversary that year, we stayed in touch. Once or twice a year, he’d call and say, “I made some scrapple. Can you come over tomorrow?” The old Dutchman, as he called himself, would spend hours whipping up scrapple and liver pudding in the basement of his Hokendauqua home. I’d follow him downstairs and watch as he sliced 3-pound slabs of scrapple and separated each slice with waxed paper that he’d cut into small rectangles. Then he’d put the slices together to re-form the slab and wrap it in freezer paper. The waxed paper made it easy to get at the slices when you got the slab out of the freezer.

He’d give me a plastic bag with five or six chunks of scrapple and a few pounds of liver pudding and sometimes a bottle of homemade wine, and we’d troop upstairs to his living room and chat for a while. He had lots of family pictures there, and some of his friend Matt Millen, the former NFL linebacker and head of the Detroit Lions who was raised in the neighborhood. The photos were always fodder for conversation.

Once, I gave some of Bench’s scrapple to my mom, who said it was the best she ever had and wrote him a note. The compliment tickled him, and he mentioned several times how pleased he was to hear from her.

In 2011, I included his World War II story in my book, War Stories in Their Own Words, and gave him a few copies.

Last Tuesday, his granddaughter Janine called and said he had suffered a stroke and, in keeping with his wishes that no extraordinary measures be taken to keep him alive, the family was letting him go and had moved him to St. Luke’s Hospice House outside Bethlehem.

The news came as a shock. Even at age 89, Howard W. Hartman was one of the toughest, hardiest guys I knew. He had Popeye forearms. On top of the rigorous training he underwent as a paratrooper, which he partly credited for his longevity, he had worked for many years as a builder and bricklayer. He was fine when my wife, Mary, and I visited him one Sunday in March. I couldn’t imagine his being laid low.

On Thursday, June 6, about the time I would have picked him up for the D-Day picnic, I went to see him at St. Luke’s. He was unconscious and not expected to recover. His breathing was labored. A woman on the staff said hearing is the last to go, so I sat by his bed and talked to him for half an hour, about things like the picnic, his scrapple-making and his stories of growing up in Hokendauqua. I recited the 23rd Psalm for him.

When Janine called Saturday to say her grandfather had died, it didn’t hit me so hard.

I’d had the chance to tell him goodbye.