‘Before their voices are silent’ 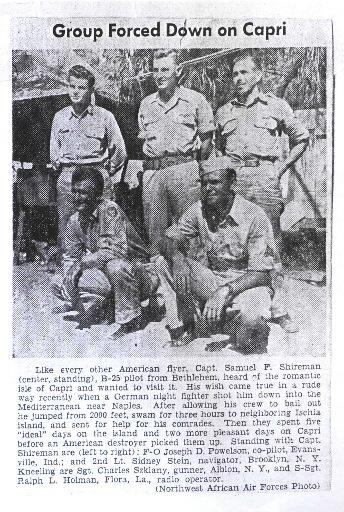 Another of my war story subjects died April 28 — Army Air Forces veteran Sam Shireman, who was 94 and had been living in Fellowship Manor, Whitehall.

A snapshot of Shireman as a young flier

I attended a calling time last week at the manor and met some of his family members and friends. My story on him, which ran in The Morning Call on Sept. 9, 2010, the 67th anniversary of the mission on which his B-25 Mitchell bomber was shot down, was displayed on an easel, along with photos that included one of Sam and me standing together as he held the plastic model of a B-25 I had built years ago. It was my gift to him.

Afterward at home, I went through my file on Sam. It includes that photo, as well as a copy of the Sept. 30, 1943, telegram to his wife, Alice, in Bethlehem reporting that “Capt. Samuel F. Shireman has been reported missing in action since nine September,” a copy of his wartime diary and other papers and emails.

Sam was on his 39th mission as a B-25 pilot, assigned to knock out German military installations in the Naples area. His plane would never return to the base on Sicily. After dropping its bombs that night, it veered away from Italy’s coast and got hit by anti-aircraft fire. Then a German fighter pounced on its tail, and Sam dived and turned to evade it. “Our plane was on fire,” he told me. “We had to bail out.”

Sam’s descent by parachute landed him in the warm Tyrrhenian Sea. He swam in the darkness to the island of Ischia, where he was reunited with his co-pilot, Joseph D. Powelson of Evansville, Ind.; navigator, Sidney Stein of Brooklyn, N.Y.; gunner, Charles Szklany of Albion, N.Y.; and radio operator, Ralph L. Holman of Flora, La. The Navy rescued them and took them to the nearby resort of Capri.

Sam Shireman poses with me while holding the model B-25 Mitchell bomber I gave him after doing his story for The Morning Call in 2010. He sent me the photo in a Christmas card the next year. I built the plastic model and used it during my interviews with him.

One of the papers in my file is a map Sam drew for me showing where his plane was hit, where he smacked into the sea and his path to Ischia and Capri.

Another item is an eloquent email I got from an acquaintance of Sam after the story ran. It sums up the importance of recording veterans’ stories for posterity. Here it is: 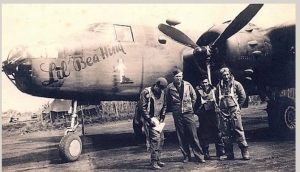 This is the B-25 Mitchell bomber Shireman was flying when he was shot down, “Lil’ Bea Hind.” It’s not clear whether he is in the picture.

“Thank you for telling Sam Shireman’s story. I know Sam, but never knew about his service to America.

“Since he’s one of the many from the Greatest Generation who have their stories to tell, I think it’s important for those stories to be told before it is too late and their voices are silent.

“My own father was a tail gunner in the Pacific Theater during WWII and unfortunately his early death in 1984 prevented him from eventually opening up about many of his war experiences later on, as others like Sam have done.

“It’s difficult to believe that in 2011 it will be 70 years since the Japanese attack on Pearl Harbor and America’s entry into the Second World War. That means that fewer and fewer of the generation who fought against tyranny and preserved freedom remain.

“Their lessons and stories about the history in which they participated need to be preserved. Thank you for adding to that roll call with your interview of Sam.”

8 responses to “‘Before their voices are silent’”