Two young men from the Class of ’37 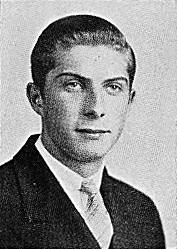 Improbable connections with other people are so commonplace, they shouldn’t surprise us.

After my first meeting with Bob Kroner, I mentioned to my wife that the Pearl Harbor attack survivor was a 1937 graduate of Easton High School.

“That’s when my dad graduated from Easton High,” Mary said.

Some coincidence! Could they have known each other?

Mary’s dad, Harry Schleicher, had also served in World War II, but in the Army Air Forces stateside. He died in 1999.

Bob, now 93, had been in the Army Signal Corps in Hawaii and later in Europe.

When I met with Bob again at his early 19th century home outside Bethlehem, I told him about the connection.

He said he recognized Harry’s name but didn’t remember him. His wife, Geraldine, scurried to get Bob’s yearbook but couldn’t immediately find it.

Later, I told my mother-in-law, Naomi, how Bob and Harry were linked. Over the weekend she came up with Harry’s yearbook, the Rechauffe, which means a rehash or something made up of old material.

Sure enough, Bob and Harry are pictured among Easton High’s 384 graduates of 1937.

Next to Bob’s portrait, the text reads: “Robert is rather shy when you first meet him, but, after you have gained his friendship, he is one of those rare people who will always stand by you.”

Pages later, Harry is described as “one of the most active musicians of the class. He plays the violin well and also is proficient with the clarinet and the saxophone.”

Bob went on to join the Army in 1940 and was a staff sergeant in the Signal Corps at Hickam Field when the Japanese attacked. Later, he became an officer and served in Gen. George S. Patton’s 3rd Army headquarters in Europe.

Harry joined the Army Air Forces in 1943 and was a bombardier instructor at Midland, Texas, where he taught the use of the Norden bombsight. He also was commissioned an officer.

Bob and Harry had one other connection.

The large American flag that Morning Call photographer Harry Fisher used as the backdrop for his portrait of Bob was the one that had draped Harry Schleicher’s coffin.

You can read Bob Kroner’s account of the Pearl Harbor attack at http://articles.mcall.com/2012-12-07/news/mc-pearl-harbor-war-story-kroner-20121206_1_dit-hickam-field-pearl-harbor