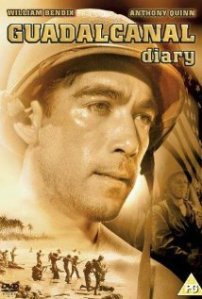 Anthony Quinn as a Marine in "Guadalcanal Diary," 1943

I’m a sucker for the speeches in Hollywood’s World War II propaganda flicks. Dane Clark makes a good one as merchant mariner Johnnie Pulaski in 1943’s Action in the North Atlantic, but my favorite is actor William Bendix’s “I’m just a guy” speech in Guadalcanal Diary, from the same year.

One night several years ago I got home from work, switched on Turner Classic Movies on the kitchen TV and yahoo! There was Bendix and his whole gang of Marine pals – Preston Foster, Lloyd Nolan, Richard Conte, Anthony Quinn, to name a few – slugging it out on the island with the Japanese.

Bendix’s speech was coming up, so I ran to get my microcassette recorder and held it ready by the TV’s speaker. When the scene started, I turned on the recorder. Later, I transcribed it and I’ve been carrying a copy in my briefcase ever since. Occasionally I show it to folks, who for some reason don’t appreciate it as much as I do. So now I have the idea of sharing it with you. Here goes:

THE SCENE: A bunker on Guadalcanal during a heavy Japanese bombardment.

POTTS: Father, you got any objections if I say what I’m thinkin’?

POTTS: Well, I don’t know about these other guys, but … I’m tellin’ you this thing is over my head. It’s gonna take somebody bigger than me to handle it. I ain’t much at this prayin’ business. My old man, he’d always take care of that.

MALONE: Yeah, my old lady was like that, too.

POTTS: Well, I don’t know that I mean that kind of prayin’. You know, the Lord’s Prayer and things like that.

MALONE: I know what you’re talkin’ about, Taxi. I used to pray that way when I was a kid. Y’know, please gimme this, gimme that, please let the Yanks win. I never been in a spot like this before in my life.

POTTS: I’m no hero, I’m just a guy. I come out here because somebody had to come. I don’t want no medals, I just wanna get this thing over with and go back home. I’m just like everybody else, and I’m tellin’ you I don’t like it. Except maybe I guess there’s nothin’ I can do about it. I can’t tell them bums to head somewhere else. Like I said before, it’s up to somebody bigger than me, bigger than anybody. What I mean is I … I guess it’s up to God. But I’m not kiddin’ when I say I sure hope he knows how I feel. I’m not gonna say I’m sorry for everything I’ve done. Maybe I am and maybe I’m not. When you’re scared like this, the first thing you do is start tryin’ to square things. If I get out of this alive, I’ll probably go out and do the same things all over again, so what’s the use of kiddin’ myself? The only thing I know is I … I didn’t ask to get into this spot. If we get it – and it sure looks that way now – well then I only hope he figures we done the best we could and lets it go at that. Maybe this is a funny kind of prayin’ to you guys, but … it’s what I’m thinkin’ and prayin’.