Happy birthday to you, Duncan Cameron 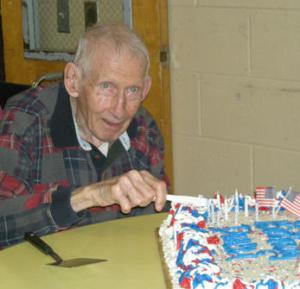 struck a philosophical note on his 90th birthday Friday.

“We can’t live forever,” the World War II veteran told me with a smile, surrounded by family and friends who had surprised him at the Mary Ellen Convalescent Home south of Hellertown.

I’d been invited by Duncan’s nephew, R. Bruce MacDougall, and his wife, Pat. It was Bruce who put me on to his “Uncle Dunc” a year earlier, when I ran a query in The Morning Call seeking D-Day veterans. Bruce’s response led me to interview Duncan for a story that ran Sunday, June 6, 2010, marking the 66th anniversary of the Normandy invasion. Here’s the link: http://www.mcall.com/news/warstories/mc-e-duncan-cameron,0,3056405.story

Bruce and Pat’s son, Mike, came to the party. He works at Lehigh University, a connection he shares with his grand-uncle – Duncan got a degree in business administration from Lehigh after the war. Duncan’s niece Cathy Spiller was there, along with his friend since the 1960s Marshall Cabe; and Barbara Greener, whose husband and Duncan were childhood friends in west Allentown, near my home. She came with her daughter, Deborah.

Duncan has been struggling with Parkinson’s; he can’t walk and has no use of his left arm, but his right still gives you an iron-grip handshake. Last year he was among several D-Day veterans who attended a picnic in Nazareth put on by the Lehigh Valley Chapter of the Veterans of the Battle of the Bulge to honor them. One of the speakers, state Rep. Steve Samuelson, held up that morning’s paper for all to see. It had my story on Duncan and his picture prominently on the front page.

Amazingly, Duncan kept a diary while with the 1st Infantry Division. In what was his first exposure to combat, his Company C, 26th Infantry Regiment hit Omaha Beach on D-Day more than 11 hours after the first troops came ashore – and still faced hot German fire.

Duncan’s entry for June 6, 1944: “D-Day! Landed about 6 p.m. in water up to our necks. Our boat almost got it maneuvering into shore. Plenty of hell on the beach. One barrage whistled right overhead & I thought surely I got it. Sam, Sgt. North, Frey & Robbie were wounded. Lynne was killed. Marched all night – no sleep. Plenty of close calls. Ran into a Jerry patrol.”

Even more amazing, Duncan wrote a poem in his pocket diary a few days after D-Day while in a foxhole amid Normandy’s hedgerows. We published it with my story.

In 2003, Duncan donated his diary and other writings to the Veterans History Project, American Folklife Center, Library of Congress. Here’s the collection info: http://lcweb2.loc.gov/diglib/vhp/bib/6555

A photo The Morning Call ran shows Duncan outside a hospital in Memphis, Tenn., in the spring of 1945, one arm in a sling. He had been wounded on Sept. 19, 1944, near Stolberg, Germany. In the photo, he’s standing close to his sister in uniform, Cpl. Betty Cameron of the Women’s Army Corps – Bruce MacDougall’s mother. Both are grinning broadly. It is one of the most heartwarming war story pictures we’ve ever printed.

Almost a year has passed. On Friday, April 8, we sang “Happy Birthday” to Duncan, which he followed with the observation: “They’re no singers, but they’re pretty good.” A cake was shared with the dozens of other nursing home residents gathered in the community room. Duncan opened gifts of candy and fruit, his sky blue eyes alight.

Just before I left, Pat MacDougall showed me something that affirmed yet again the value of getting vets’ stories into the newspaper. She took me to Duncan’s room, where all three pages of his Morning Call story hang side by side on the wall next to his bed.

“Everybody reads it,” she said.