The magic of making connections 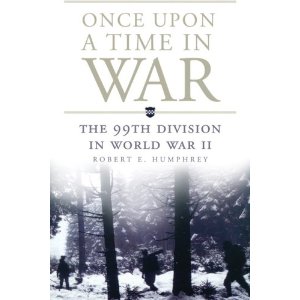 War stories have a way of bringing people together. Many times in the 11 years I’ve been writing the “in their own words” series for The Morning Call, people have gotten connected as a result – long-separated friends, historians who want to speak with the veteran I interviewed, people who knew someone the vet had served with.

I’ve had three such experiences this summer, two in the last week alone.

After my Memorial Day story about Dick Richards of Williams Township, a soldier whose lower jaw was blown off several days after he crossed the Remagen bridge into Germany’s heartland in 1945, I got an e-mail from Sacramento State professor Bob Humphrey, who had read the story online. Humphrey had written a book about Dick’s outfit, Once Upon a Time in War: The 99th Division in World War II http://www.amazon.com/Once-Upon-Time-War-Commanders/dp/0806139463/ref=sr_1_1?s=books&ie=UTF8&qid=1281326028&sr=1-1. The book mentions Dick and what happened to him near Steinshardt, Germany, as told by another soldier in Company C of the 395th Infantry Regiment. That soldier, Oakley Honey, is also in Dick’s story in The Morning Call,   http://www.mcall.com/news/warstories/all-dickrichards,0,5782458.story. Bob had interviewed him for his book.

“I never knew he survived that terrible wound. I didn’t realize the hell he went through afterwards,” Bob said, referring to Dick’s desperate run to safety and the more than two years he was hospitalized while doctors made him a new jaw. So Bob wrote an update on Dick for the 99th Division newsletter, which Dick receives. Bob also sent Dick, who turned 94 a few weeks ago, a signed copy of his book.

In Easton, Battle of the Bulge vet Jack Davis spent Aug. 1 with visitors from central Pennsylvania, Ray Brugler and his girlfriend, Marsha. They had come to learn more about Ray’s uncle, Russell Brugler of Lewistown, Pa., who was machine-gunned to death in front of Jack on Jan. 28, 1945, in Pascheid, Germany.

Ray had been going through a relative’s things and found a copy of my interview with Jack, which ran in The Morning Call on Christmas Eve 2006,  http://www.mcall.com/news/all-5bulgedec24,0,1718578.story. In the story, Jack describes Russell, a machine-gunner in his late 20s who had been wounded twice before he was killed, as a man who thought war was fun. Right after Russell made a comment to that effect, Jack says, “The Germans were shooting a machine gun against our machine gun. Brugler was riddled.”

With an audio recorder running, Ray asked Jack about his uncle (“He was fearless,” Jack said) and about the circumstances of his death (“He stood up and went ahead a few yards, and that’s when he was hit.”)  Ray and Marsha also asked about Jack’s other combat experiences with D Company, 10th Infantry Regiment, 5th Infantry Division.

“They were very, very pleased with our conversation,” said Jack, 86. “They ate it up.”

Last week, a few days after my story on 84-year-old Don Mack, who survived five days in the shark-infested Philippine Sea after the USS Indianapolis was sunk on July 30, 1945, I got a call from Herbert Rehrig of Saucon Valley. Herb graduated from Wilson High School in 1941, two years ahead of Don, and was wounded in Europe while serving in the Army. He said that when they were young, he and Don played football together in back of Mack Printing, Don’s family’s business.

Herb, who is 87, wanted me to pass this message on to his old friend now in the Poconos: “I’m still alive.”

I’m always amazed at the connections that are made when veterans tell me their stories, which are posted permanently on The Morning Call’s website at  http://www.mcall.com/news/local/warstories/. Bringing people together isn’t the purpose of publishing these accounts, but it’s a gratifying side effect.