The power of letters home from Vietnam

When I got involved in researching my cousin Nicky’s death in Vietnam, I spoke with family, friends, his fiancee and Army buddies. Their remembrances – and the way they still feel about him – touched me deeply. Nothing affected me more intensely than the letters he wrote home.

Nicky Venditti’s tour of duty lasted only eleven days. He was an American soldier ready to fight for his country for only a week before his grievous accident. His final  five days were spent unconscious in an Army hospital. Arriving in South Vietnam on the Fourth of July, 1969, he wrote to his parents first thing, like many GIs who had reached their destination. Both of his parents had remarried after their divorce, so he sent two sets of letters, one to his mother and stepfather, the other to his father and stepmother.

Twenty years after Nicky’s tragic death, all four of his parents raided their musty attics to pull out his old letters from cigar and shoe boxes. They’d never gotten rid of them;they even kept the air mail envelopes with their red, white and blue borders.

In what might have been a last letting-go in their old age, they turned their son’s letters over to me. Not copies, but the originals, all on lined composition paper six by eight-and-a-half inches. I’m looking at them as I write this, for perhaps the hundredth time, and fighting back tears.

There is something immediate, timeless and unforgettably intimate about handwritten letters. When I look at Nicky’s, they’re as fresh as if he had dashed them off today. I can see him writing them in his barracks, the Army helicopter pilot eager to get his hands on the controls of a Huey, to do his job and go home in a year to the girl he plans to marry.

It’s the beginning of July 1969 again. Nicky is alive and well.

His first letter home is tinged with irony.

“Well I arrived in this wonderful place called Viet Nam yesterday at three,” he wrote to his dad and stepmother on July 5. “I still can’t believe I’m here. But when I look around I get more assured I am!!…Oh, I’m at Cam Rahn Bay Replacement Center right now. It’s about 150 miles from Saigon. It’s probably the safest place in Viet Nam. Too bad I can’t get stationed here.”

Nicky wrote three more letters to his parents before July 10, when an Army instructor’s grenade slashed him with metal fragments, almost tearing off his left leg, in a classroom just off the Americal Division base at Chu Lai. All of his letters look as if he’d scribed them with the same blue ballpoint pen. He must have had it handy.

“I’m sorry this is a little sloppy, Dad, but it’s hotter than hell here…Well I’ll let you in on the situation. It’s not too good. There used to be only companies of V.C. around here, but now there are regiments and divisions of them. The lieutenant who briefed us said they expect an offensive, but do not know when…That’s all I can let you know for now. Besides I wouldn’t tell you anymore anyway, because you’ll worry your head off.”

The next day, July 7, he wrote to his mom: “This place is lousy. I can’t even see why we are here because Viet Nam isn’t worth a nickel.”

Nicky sent other letters before he was wounded. They were to his teenage fiancee, Terri, but I never saw them. After his death, she had her best friend burn them because it hurt her too much to read them – and she didn’t want to be the one to destroy them.

When Nicky’s belongings were sent home to his parents, they included an unopened letter to Terri. Nicky hadn’t had a chance to mail it, and Terri never read it or even knew that it existed. Nicky’s stepmother promptly had it burned in the back yard, still in the sealed envelope. She felt it would only have intensified Terri’s grief, and wanted to spare her.

As part of my research for my book on Nicky, Quiet Man Rising: A Soldier’s Life and Death in Vietnam, I read Dear America: Letters Home from Vietnam, edited by Vietnam veteran Bernard Edelman. It cut to my heart.

The purpose of Dear America, the book’s jacket says, is to “evoke reconciliation and an awareness of the enduring human values which are reflected in the conflicting experiences of the Vietnam war.”

Nicky’s letters home would have fit in nicely. 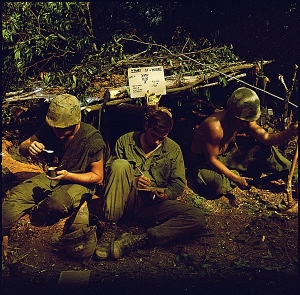 This entry was posted in Veterans' Histories, Vietnam War. Bookmark the permalink.

One response to “The power of letters home from Vietnam”